Rockygrass’ Best New Band, The Railsplitters have an adventurous spirit that breaks the traditions of the bluegrass genre with pop-influenced numbers and earthy melodies. Join us at Baur’s Listening Lounge for a bluegrass Saturday night on March 19.


Fresh off the success of their first album in 2013, The Railsplitters got busy touring the US, meeting wider audiences, and of course, spending hours in the tourvan. As you can imagine from five members traveling across the United States, the musical array pouring out of the van onto the open highway was wildly eclectic, crossing over genre and time. From boundary breaking trip hop and electronica groups like Gorrilaz and Thievery Corporation, to more direct influences like The Infamous Stringdusters and Lake Street Dive, the musical potpourri heard in their time on the road eventually began to seep into the band’s own music. With their 2015 album, The Faster it Goes, they’re using these new sounds to break the bonds of bluegrass and unleash tradition. Lauren Stovall and the rest of the ‘Splitters suggest that using your roots to evolve is really at the heart of the genre as, “Bill Monroe himself was an innovator.” With their finger on the pulse, The Railsplitters are pushing the genre forward, carrying in the tradition of breaking boundaries with their innovative sound. 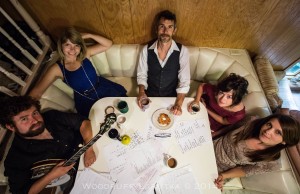 The Railsplitters’ secret weapon is twofold: first, the innovative imagination of banjo player Dusty Rider’s songwriting, who writes with the full band in mind, imagining an entire song in his head before it’s even heard it out loud. Second, the powerfully distinct vocals of Lauren Stovall whose voice is as clean as Emmylou, as cutting as Allison Krauss, and carrying some of the attitude of Dolly herself. Lauren’s vocal lines fill The Railsplitters’ sound with something distinct and undeniable. In addition, part of The Railsplitters new color is brought on by the band’s newest member Christine King whose superb fiddling adds a driving force to the band’s sound. With masterfully executed mandolin and banjo by Peter Sharpe and Dusty Rider and well supported by upright bassist Leslie Ziegler innovative style, The Faster It Goes testifies to The Railsplitters’ multipolar and collaborative songwriting, giving voice to the impressive talents of its members and a cohesive character to the sound.

From the first track, “Tilt a Whirl,” it’s clear that The Faster It Goes is exploring modern speeds: “My mind is like an old Tilt-A-Whirl, it never seems to stop, not even for this girl.” With the foot-stomping drive of a reworked traditional tune like, “Salt Salt Sea,” or the complex harmony and aggressive rhythms in “It’s A Little Late,” The Railsplitters are trying to keep up with life, the faster, and faster it goes. While these songs pack an edge and highlight the band’s progression into more pop-influenced numbers, The Railsplitters know that life isn’t only lived in the fast lane, taking a few moments to unwind with earthy tracks like “The Estuary”, which pays tribute to their musical mountain roots, and the album’s hidden track, “Sweet Little Miss Blue Eyes.”

They operate with the instrumentation of a bluegrass band, but The Railsplitters are making music totally unlimited by tradition. This is music for the open road, the open dance floor, and open ears–music of the American West, made for all.

Come down to Baur’s and experience instrumental and vocal harmony with Colorado’s own bluegrass sensation, The Railsplitters.

– “The complexity of their arrangements, the beauty of their vocals, and excitement in their performance should put them right in the center of your radar.” -Stephen Mougin, Sam Bush Band

– “Newgrass and conventional Bluegrass combine to make this the best new project I’ve heard all year. It’s all very accessible, and pleasant for the ears.” -Dan and Audrey, CKWR

– “The band’s urbanity and sophistication are what impress, sufficient to cause the listener to forget initial expectations of rustic notes. It’s almost shocking when one comes upon a cut that’s pure, straight-ahead bluegrass. And the Railsplitters do that pretty impressively, too.” -Jerome Clark, Rambles.net