MAS Eclectic is bringing The Malvinas to Denver this March. A feminist folk trio with a seriously original sound created by three of the most temperamental, romantic, down-to-earth, tolerant, funky, maternal, independent, impassioned, politically opinionated, completely-unlike-one-another, singer-songwriter-instrumentalists you’ve ever had the good fortune to know. Lisa Markley, Gina Forsyth and Beth Cahill are hard workin’ girls, too, on guitar, mandolin, fiddle, banjo, killer harmonies, and a veritable smörgasbord of original compositions that will have you coming back for more.

A feisty blend of jazz, traditional and folk-pop. With roots all over North America, the Malvinas pull together a broad palette of regional colors including: the blues-tinged grooves of the deep South, the spicy Cajun flavors of Louisiana, the Celtic modes of Eastern Canada and the troubadour tradition of the Lone Star State.

Individually and collectively, The Malvinas have been fortunate to work as side women and to share the bill with some really great artists including: The Burns Sisters, Bruce Daigrepont, Jack Hardy, Eliza Gilkyson, Ray Wylie Hubbard, Shake Russell and Dana Cooper. Past appearances include: The New Orleans Jazz and Heritage Festival, The Cottonwood Festival and WFMT ‘s Folkstage. The Malvinas are also directly responsible for the welfare of seven cats, five dogs, and eleven hamsters.

THE MALVINAS ARE:
Lisa “I am not interested in what you think” Markley (guitar, banjo and vocals). After graduating from North Texas with a degree in music, Lisa melted down her trombone to make a belly button ring. Formerly a member of the way cool band Akoustik Nerve, and currently a member of Markley & Balmer, Lisa is inspired by the music of Joni Mitchell and the Subdudes – and she thinks that Luciana Souza is just the coolest thing since she discovered fresh cilantro sometime in the Spring of 1998. Lisa is also an award winning songwriter with a inimitable groove oriented edge. She released her first solo project, Goddess of Groove, in the fall of 2000, followed by two jazz releases on the Soona Songs label (www.soonasongs.com).

Gina “the hopeful romantic” Forsyth (guitar, violin, vocals). Since fleeing the Bible Belt an undisclosed number of years ago, Gina has been (in no particular order): a fiddle player in several Cajun bands for the last twelve years (in the same one for the last seven), a folk DJ on a college station for ten years, a college student for nine years, a civil servant for ten months, a movie extra for a day, and a drummer in a punk rock band for all of five minutes. Her favorite artists include the McGarrigle Sisters, Ralph Stanley, Belton Richard, and a host of friends she has played and recorded with over the last several years. Her solo CD, You Are Here was released in 2001.

Beth “the irritating optimist” Cahill (mandolins, tenor guitar and vocals). Beth decided to pursue music full time after nearly being crushed to death at a Violent Femmes concert. She never gets tired of listening to Glenn Gould’s recordings of the Goldberg Variations and trying to explain 100 Years of Solitude by Gabriel Garcia Marquez. Her influences include: Rickie Lee Jones, The Roches, Richard Thompson and The Replacements. Her solo CD, Hitching to La Paz was released in 1999 after hitch-hiking across Bolivia. She is from Canada and has no sense of humor.

“There is a distinct strength in women’s music and they tap into it brilliantly. Women with wide ranging influences…the Malvinas are serious and playful, often in the same song…The title cut was written by the trio’s namesake, Malvina Reynolds, in 1964. It is as poignant today as it was then with these lyrics: “God bless the truth that fights toward the sun.” One of the most fully realized folk albums of the first half of the year.” 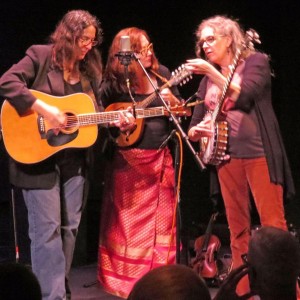