Baur’s will erupt with the sound of Brazil when Paula Santoro and Ian Faquini stop by this October. Their latest project, Metal na Madeira (Metal on Wood) is more than a portrait of two artists carrying out a project together. It is a portrait of Brazil’s northeast region and dabbles with traditional rhythms including Maracatu, Frevo, Baião, Xote, and Toada, while stepping towards the future with modern harmonic and melodic structures. Joining Paula and Ian is percussionist Carl Dixon and pianist Victor Mestas Perez. Music Appreciation Society invites you, your family and friends to join us on this musical journey of northeast Brazil with Paula, Ian & Quartet.

The album art was developed based on a traditional Northeastern art called Xylography, in which the artist develops an image by engraving wood with a metal object. Likewise, Ian Faquini and Paula Santoro engrave their music into the listener’s heart as the metallic harmonics of the voice interplay with the wooden tone of the guitar. The lyrics of the CD describe the exuberance and poverty of that region of Brazil –the joy, colors and natural beauty, but also sadness, drought and longing of a people who are accustomed to extremes. 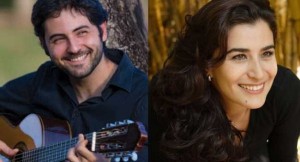 Metal na Madeira counts on an All-Star cast of collaborators and special guests who helped develop the album’s unique sound. It features Saxophone extraordinaire Spok, who arranged the explosively joyous title track and plays soprano sax alongside Harvey Wainapel on alto sax and clarinets on his own beautiful and soulful arrangement of Pinhem-Pinhem, Jeff Cressman on trombone, Vitor Gonçalves on Rhodes and accordion, Scott Thompson on bass, Rafael Barata on drums and percussion, Sergio Krakowski on pandeiro and Sandy Cressman and Viven Monica Golcwajg on backing vocals.

Paula and Ian first met through the Brazilian composer Guinga, with whom Paula collaborated on a record and tour around Brazil and Europe in 2007, launching the composer’s album titled “Casa de Villa”. Ian met Guinga when he was 16 and this encounter changed his life. Ian fell in love with Guinga’s music and began devoting himself deeply to composing and exploring his own Brazilian roots through music.

In 2014, when Paula and Ian were both part of the faculty at California Brazil Camp – a performing arts camp focused on Brazilian music and dance, Paula fell in love with his compositions and their partnership began. The mutual admiration sparked a desire to record an album together and they did so at the famous Fantasy Studios in Berkeley, CA in September of 2015.

Paula Santoro was born in Minas Gerais (Belo Horizonte), the land of legendary Brazilian composers Milton Nascimento and Ary Barroso. She is one of the most important singers of her generation. Paula was nominated for Best Singer at many awards: Rival Petrobrás Music Award, Visa Award (one of the winners), Troféu Faísca Award (two times the winner). Last year, Paula toured in United States (San Francisco, New York, Seatle, etc) and was invited to come back this year. Paula Santoro performed alongside Edu Lobo, Yamandú Costa, Mário Adnet, Monica Salmaso, Renato Braz and the Muiza Adnet releasing the álbum Mario Adnet – a look on Villa-Lobos” nominated for Best Classical Album in Latin Grammy.

Ian Faquini was born in Brasília and lives in Berkeley (CA, USA) since he the age of eight. He graduated in Music at the “California Jazz Conservatory” in December 2015 and was immediately invited to join the College crew teaching guitar and Brazilian music. He is influenced by Guinga and Marcus Tardelli, with whom Ian studied for six years.

Born and raised in Caracas, Venezuela, Victor Mestas Perez, 2010 Latin Grammy Winner, has more than 80 recordings to his professional credits.  Victor has accompanied an array of world renowned singers including Julio Iglesias Uruguay/Argentina tour in 2010, Soledad Bravo, Cheo Feliciano, Luis Enrique, and many others. Mestas has performed (as pianist/keyboardist/arranger/producer) for renowned bands in Venezuela, including Guaco, Caracas son 7, and El trabucovenezolano (Venezuelan Salsa All-Stars). Since 2001, Victor has been an endorsement artist for YAMAHA musical products in Venezuela.

– “Light and breezy on the surface, Mar do Meu Mundo is also typically Brazilian in its consistent ability to simultaneously contain deeper levels of meaning that are poetic and profound while at the same time remaining personal and universal.” –All About Jazz

– “Tasty, sexy stuff that hit’s the nail right on the head.” – Midwest Record

– “Paula’s sincere vocals are fluid and heavenly. They are a perfect match for the light and giddy percussion, drums, piano, and bass.” –Matthew Forss, Inside World Music 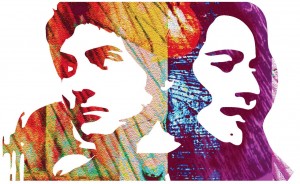