Their new album Something to Someone, released October 2015 on Sky Island Records, has been praised by Performer Magazine, All Music Guide, PopMatters, The Guardian, and others. The album was recorded at historic Bear Creek Studios in Wooinville, Washington with producers Ryan Hadlock and Jerry Streeter (The Lumineers, Brandi Carlile, Elephant Revival), whose attention to detail shines in Run Boy Run’s multi-voiced and multi-stringed arrangements. It’s no surprise that the band counts Garrison Keillor of NPR’s ‘A Priairie Home Companion’ and renowned Irish fiddler Kevin Burke among their growing legion of fans. 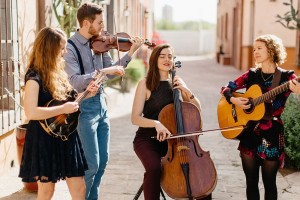 The unique sound of the band is rooted in the traditional music of the Appalachian South, continuing a sense of innovation in traditional American music put forth by bands such as Nickel Creek, Crooked Still, and The Wailin’ Jennys. Run Boy Run continues this journey into music that is dynamic, orchestral, and brimming with beauty. Three strong female voices weave a tapestry of sound, and the award-winning fiddlers cut a path for a tightly formed rhythmic front. Every arrangement is – at its core – captivating.

From winning the band contest at Pickin’ In The Pines (mere weeks after forming in 2009) and a special appearance at the Telluride Bluegrass Festival in 2012, to two appearances on NPR’s ‘A Prairie Home Companion’ (host Garrison Keillor was also impressed enough that he penned the liner notes to the band’s debut album), they were tagged by Paste Magazine as “One of the top 10 Arizona bands to hear now.” They’ve been making fans across the U.S. with their open-ended musical approach and dynamic stage presence, and will take that live show back across the country coast to coast this summer and fall.

You’ll want to be part of this sensational bluegrass evening as Run Boy Run fills Baur’s Listening Lounge with their bold instrumentation and vocals. This lively performance will have you moving in your seats and up dancing on your feet. “Run Folks Run” to Baur’s on June 10 for this exclusive Denver performance by Run Boy Run.

– “When I hear Run Boy Run, it all comes back to me, why I started doing that show back then. I hope they go on forever.” – Garrison Keillor, A Prairie Home Companion