Head to Baur’s for a classical chamber music event in the Salon featuring cellist and guitarist musicians, Patterson & Sutton Duo. “They play with exquisite grace… full-bodied expression that will enchant” (Maria Nockin, Fanfare) and will leave you in awe. Music Appreciation Society invites you, your family and friends, to experience the “expressive, poignant” (Stephen Goss) music of Kimberly Patterson and Patrick Sutton.

Kimberly Patterson and Patrick Sutton formed their cello and guitar duo in 2011 as doctoral students at the University of Colorado in Boulder. This collaboration has led to recitals, residencies and lectures throughout the United States and abroad. In May of 2013, the Patterson/Sutton Duo released their debut album, “Cold Dark Matter: Music for Cello & Guitar,” on the MSR Classics label which The Strad praised for its “Wit and imagination”. Dušan Bogdanović declared: “Everything [on Cold Dark Matter] is performed with excellence and sensitivity. I especially like the beautiful tone and sense of lyricism, though the virtuosity of both is apparent.” 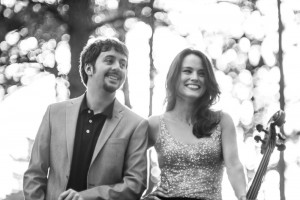 In January of 2014, they held a guest artist residency at the Afghanistan National Institute of Music in Kabul, where they worked with the budding generation of young Afghan Musicians and gave a performance at the Canadian Embassy of Afghanistan. The duo has presented lecture-recitals at the 2014 Guitar Foundation of America Convention, and more recently at the 2016 International Guitar Research Center Conference at the University of Surrey. Soundboard magazine called their GFA talk “a deeply inspiring analysis and performance”. This June, they have been invited to give a featured recital at the 2016 GFA Convention in Denver.

Whether you’re new to the chamber music scene or not, this performance by cellist Kimberly Patteron and guitarist Patrick Sutton is sure to be dynamic from start to finish. We invite you to this afternoon matinee and encourage you to stay for dinner. The perfect Sunday outing!

– “Everything is performed with excellence and sensitivity. I especially like the beautiful tone and the sense of lyricism, though the virtuosity of both is apparent.” – Dusan Bogdanovic

– “They are brilliant… Great music and a very living interpretation.” – Jaime Zenamon

– “What a great record, I love the Bogdanovic pieces. Really beautiful playing throughout the CD, expressive, poignant in places and ballsy when it needs to be.” – Stephen Goss