With an undeniable Cuban soul at the heart of their music, Ola Fresca will perform their traditional and modern Latin dance, salsa, and funk music at Baur’s for a special Thursday night performance. In ten years and three original, world acclaimed, awarding winning albums, they have evolved a “swinging, fearless,” tropical sound from Brooklyn that has travelled the world led by Miami raised, Cuban-American singer, songwriter, arranger, and producer Jose Conde. Music Appreciation Society invites you, your friends, and family to experience and dance to the world beats and Latin rhythms of sextet Ola Fresca.

From their rustic Cuban roots tinged 2004 debut Ay! Que Rico, to the funky, eclectic Best Latin Album in the 2008 Independent Music Awards, (R)Evolucion, the band meandered through spectrums of Latin roots styles and formats before grooving into their current incarnation and huskier trombone led tropical salsa sound. Making music with substance is a goal and Jose Conde and Ola Fresca were praised by the NY TIMES for making original music with an “emphasis on songs with characters, wordplay and mild social ideas…good for dancing and thinking.” Ola Fresca released their “Kickstarter” funded “Elixir” in 2015 on vinyl and other formats. The album is their lyrical antidote to factional bickering in the world, and a 9 song salsa set with hints of Cuban son, rumba, and timba, and Puerto Rican-style salsa that World Music Central called “one of the best albums of the year”. 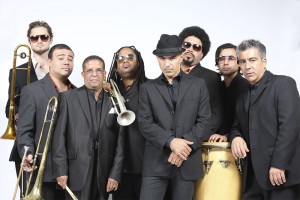 Ola Fresca’s live shows are high energy and feature some twists and turns not normally in the salsa lexicon. The band is comprised of seasoned A-List Latin players such as bass player Jorge Bringas (Omara Portuondo, Albita), pianist Coto Pinchiero (Tropicana Cabaret Habana), percussionist Gabriel “Chinchilita” Machado (Lionel Hampton, Tipica Novel), Trombonist Rey Alejandre (Willy Colon, Richard Bona) and more with Conde leading the raucous ebb and flow. Ola Fresca has shared the stage with many great musical legends and has been featured in major festivals in North America and last year in Sydney, Australia. In the summer of 2016 they will be performing shows across the East Coast on into Canada and the Midwest, USA all while Jose Conde works on a video that he will shoot in New York, Miami, and Cuba.

Get ready for Baur’s to burst with the tropical Latin rhythm from Ola Fresca. This travelling sextet will be in Denver for one night only and so head to Baur’s for dinner, drinks, dancing, and phenomenal Cuban music.

– “Displaying finesse, subtlety, and respect, Cuban-American Jose Conde evolves beyond the Cuban Revolution to a state of harmonic coexistence across conventions.” – Time Out New York