Saturday July 9 will be a night to remember when acclaimed jazz vocalist Nicole Henry mesmerizes the audience at Baur’s Listening Lounge with her soulful sound and sophisticated voice. Backed by her trio – Pete Wallace, piano; Eric England, bass; and David Chiverton, drums – you’ll experience the magic of Nicole Henry as she masters each song and draws you into every lyric. Vail Jazz and Music Appreciation Society are thrilled to have her and invite you, your friends, and family to this transcendent performance.

Since her debut in 2004, Nicole Henry has established herself as one of the jazz world’s most acclaimed vocalists, possessing a potent combination of dynamic vocal abilities, impeccable phrasing, and powerful emotional resonance. 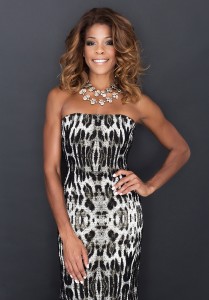 Her 2004 debut CD release, The Nearness of You, won considerable attention from audiences and critics in the U.S. and in Japan, where they named her Best New Jazz Artist of 2004. The following year, Ms. Henry’s Teach Me Tonight reached #1 in Japan and was named HMV Japan’s Best Vocal Jazz Album of 2005. Then, in 2008, The Very Thought of You substantially expanded her American audience, reaching #7 on Billboard‘s jazz chart.

The 2011 release of the Embraceable CD was a creative triumph for Ms. Henry as it expanded her recordings beyond those of the American Songbook jazz standards which had been her focus up until that time. Embraceable included more originals, soul and even a touch of gospel, and reached the Top 20 on jazz and smooth U.S. jazz radio charts. Joining Ms. Henry on Embraceable was an amazing collection of jazz artists including Kirk Whalum, Gerald Clayton, John Stoddart, Julian Lage, Gil Goldstein, Larry Grenadier, and Eric Harland.

Ms. Henry demonstrates her diversity and skills as a performer and a peerless interpreter of songs on her 2013 release, SO GOOD, SO RIGHT: Nicole Henry Live. The 13-track live album, which was recorded at sold-out performances at Feinstein’s in NYC in May 2012, showcases her soulful, inspired renditions of some of her favorite classic hits of the ‘70s from iconic artists including Bill Withers, Aretha Franklin, Joni Mitchell, James Taylor, The Commodores and Gladys Knight.

Growing up in a musical family in Bucks County, PA, Ms. Henry immersed herself in the arts early on, singing in school and church, and studying cello and ballet. After graduating from the University of Miami with a degree in Communications and Theatre, she launched a successful acting career, appearing in commercial roles as well as a series of voiceover assignments. However, she directed her strongest passion toward the development of her full-time singing career which was quickly rewarded in her present hometown, when the Miami New Times named Nicole “Best Solo Musician 2002.”

Nicole Henry is appearing exclusively at Baur’s on Saturday July 9 and you don’t want to miss this opportunity to experience this world renowned jazz vocalist. Her stage presence commands the room and her rich voice will have you transfixed and hanging on every word. Come experience Baur’s magic on this summer night with Nicole Henry.

– “Nicole Henry seems a paragon of perfection. She is tall, willowy and poised, with an expansive smile that gleams like the polished skin on her beautifully sculpted body. The voice that pours out of her is even more impressive, a burnished, honey-rich alto that can soar to gospel heights, romp with skin-tingling rhythm and drop to a heart-rending whisper, the vocal love child of Whitney Houston and Sarah Vaughan.” – Jordan Levin, Miami Herald

– “(Henry) can sell a power ballad as well as Whitney, Diana and Patti.” – Jazz Times

– “…That predicted time of greatness has arrived. Nicole Henry emerges hands down as this generation’s First Lady of Jazz. She is the genuine article, the dream at last come true…Nicole Henry has been the artist to watch in the world of Jazz.” – Sean Martinfield, Huffington Post