Neo Camerata debuted in 2004 and shared the bill with pop artists, rock bands, opera singers, symphony orchestras, and ballet companies. They performed in places as diverse as Washington’s Kennedy Center, New York’s Cutting Room, and the Cannes Film Festival. Recently re-formed and touring the country again, they will be performing Mark Landson’s original, riveting music which combines the emotion and beauty of classical, the excitement and energy of pop, and the awe-inspiring technique of virtuoso musicians. 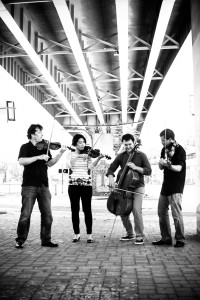 Neo Camerata has created what critics have called a “genre-busting,” “technically impressive,” “emotionally stirring” and “totally cool and amazing” experience. With a unique multi-cultural mix, Neo Camerata’s “new classical” sound has people buzzing on both the classical and pop sides of the music business. A review recently said, “Neo Camerata didn’t just exceed my expectations; they shattered them into the tiniest fragments possible. The musicianship and passion of all the performers on stage brought a fire to the songs that’s usually found only in the world of rock n’ roll. Neo Camerata brought all the intensity of classical music, but packaged it in a format that was easily accessible for the audience to absorb. Mr. Landson’s banter and analysis between songs brought a more relaxed and comfortable feel to the set than what is expected of classical performances.”