Singer, composer and instrumentalist, Michele Castro & Quartet is performing at Baur’s. She has been studying music since she was 12 years old, starting on flute at the Escola de Música in Rocinha. She began to compose at 16 years old, soon after learning how to play the guitar. Joining her is Victor Mestas on piano, Raoul Rossiter on percussion, and Ian Brighton on woodwinds. Music Appreciation Society invites you, your family and friends to join us at Baur’s for a night of Brazilian music.

At the music school, she was given the opportunity to participate in two tours in Germany (2003 & 2009) as lead singer of a Choro band. Repertoire for both tours was composed of Brazilian music such as Samba, Bossa Nova, Choro and Forró. 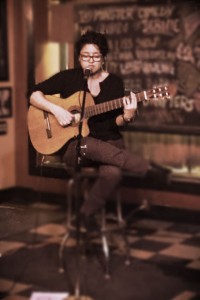 In 2006, during preparations for the Pan American Games in Rio, Michele was invited to sing the “Guias Civicos” anthem. This project was developed by SENASP, the National Secretary of Public Security, which was the institution responsible for security during the games. SENASP worked with youth in the communities of Rio de Janeiro in order to prevent violence and to involve the participation of the communities at the stadiums. The hymn was composed by Sérgio Barata who was born and raised in the Rocinha community. Michele participated in the project over the course of one year and was asked to sing the anthem in meetings for the Ministry of Justice in Brasilia as well as in other states in Brazil. Her most memorable moment was singing in the closing ceremony which occurred at Maracanãzinho in the presence of President Lula.

Besides singing and composing, Michele also works with cultural production. In 2012, she participated in a course called Solos Culturais, where participants learned about cultural production and research through the “Favela Observatory”. The project took place in five favelas in Rio de Janeiro, including Rocinha, Manguinhos, Penha, Alemão and Cidade de Deus. Over the course of 10 months, the participants discussed concepts about culture, urban intervention, action, research and cultural mapping that resulted in the publication of a book on the subject.

In 2012, Michele began to produce an event called D’SlumBrante with the objective of bringing together independent artists from territories that had been marginalized by the government or society. Artists from a variety of genres presented at the event, including musicians, actors, dancers, photographers and poets. D’SlumBrante took place without sponsors, and always in the Rocinha community.

Michele Castro will continue with her research about independent artists in order to bring about future projects that represent art and culture in underrepresented areas.

Currently, Michele resides in the United States, a place which has inspired her to delve deeper into the production of Brazilian music, valuing her culture, her people and her native country even more. 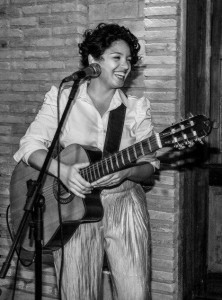