Music Appreciation Society invites you, your family and friends, to experience the phenomena that is Keith Harkin as he stops into Baur’s on his St. Patrick’s Tour.

During his time touring the States, he gained recognition from Grammy Award-winning Producer, David Foster, who then went on to sign Keith as one of his first artists to Verve Records. Keith released his first solo debut album with Foster and Verve Records, where they watched it soar to the number 1 spot on the Billboard charts. 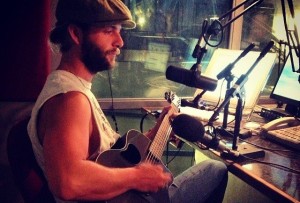 Over the last two years since his first release, Keith has been writing all of his own material for his highly anticipated, second album set to be release mid-2015. This album is funded by Keith alone and takes a different, deeper more personal direction into Keith’s musical styling.

Longtime friends and talented Producers, Andy Wright and Gavin Goldberg, took this album under their wings as if it were their own and helped Keith to bring his own style, sound and vibes to life in Sphere Studios, London. Keith’s love for the classics (Don Henley, Glen Campbell, Tom Waits, Neil Young & Van Morrison show – to name a few) are reflected in his collection of folk-infused, acoustic pop sounds. Combined with his honey-thick voice and a full live band, Keith takes you on journey that creeps into his heart strings.

While working on his solo career, Keith also has continued to perform as a lead soloist in Celtic Thunder. His role in Celtic Thunder has brought him to write and record a number of his own songs for the show, as well as, perform for a vast audience Worldwide, including President Obama and the first Lady and recording numerous PBS specials.

When Keith isn’t touring or recording, you can catch him at the beach surfing or continuing the gypsy travel life from adventure to adventure. But always with a guitar nearby.

– “Keith is just an incredible artist. He’s poised, he’s dramatic when need be, He’s accomplished as a musician, his song writing is getting beyond the beyond.” – David Foster, Chairman, Verve Music Group

– “Keith Harkin is a Star on Stage. Along with his unforgettable charisma, Keith can write, play and perform both original and classic songs” – Sharon Browne, Celtic Thunder Producer