Music has been a beacon, a teacher and a mirror. New York Jazz guitarist Josh Maxey’s earliest memories are of music playing loudly. The sound imbued the air with vibrations that blurred the lines between what he heard and his own thoughts and dreams. Baur’s welcomes this awe-inspiring musician along with his organ based soul jazz trio featuring music from his new record just released on the Miles High label – “Celebration Of Soul”.

For Maxey, the creative current in sound unlocks worlds of love, meaning and purpose. He has found music to be closer to this source than he even imagined. The first time he heard this directly articulated was John Coltrane’s A Love Supreme. Maxey heard the first two songs and knew that this was a height of creative expression. The feeling he got from the music told him it was possible to blend the personal or spiritual journey and the musical one. 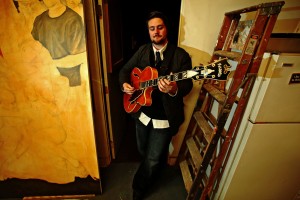 Maxey has found that music accesses states of consciousness that serve as a window or springboard into these spiritual areas of the soul. The combinations of notes and the intent they are played with matter deeply. Music gives insight, via a language beyond words, into lifetimes of the many peaks and valleys of being human. It gives listeners a chance to lose themselves and find so very much in those same moments. It communicates beyond time. As it is played, Maxey believes it becomes the listeners as much as it is the musicians. The experience of hearing the sound is tailor fit to each listener and can be a pass key to the most fundamental part of the self. 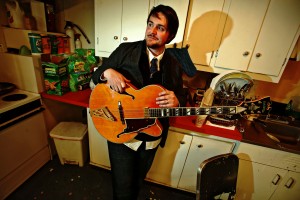 In 2012 Josh set out to record 6 albums in 12 months. This June he released the 10th and last of the cycle with “Celebration of Soul”. The series has been downloaded over 30 thousand times, critically reviewed and played on FM jazz stations. The series includes 50 original compositions and every album has different musicians and instrumentation. The music was recorded with some of the best musicians in NYC and Denver, CO

A sought after teacher and performer, Maxey has been a student of listening and playing music most of his life. As a guitarist, working towards excellence and constant advancement are ongoing goals that have become daily companions. So are the many bumps and moments of doubt along the way!

Don’t miss the opportunity to experience on of Jazz’s rising star’s – who’s new album is being added to radio playlists across the country. Music Appreciation Sociey and Baur’s are excited to host Josh and his band for a “celebration of soul” in the Listening Lounge.

All About Jazz article on Josh Maxey

“Sophisticated yet demure…even sublime at times, Maxey has embodied the culture of his experiences into a captivating collection that reinvents the wheel, over and over again. This is one collection of beauty & art through jazz that will not disappoint. Even the most critical of ears will find that this is a must have.”Cicily Janus – Author, The New Face of Jazz

We are in a different day musically. You can do exactly what you’ve dreamed of. There are very few restrictions. The cost of making a record can be reasonable and you can certainly find an audience, you can find people who like the music you make and make meaningful connections with them. – Josh Maxey