Making his second appearance at Baur’s, Josh Maxey is bringing his “dreamy soundscapes” (Greenblatt, Classicalite) back, but this time with his quartet! This night will be a Celebration of Soul (CD release 2015) and features Maxey on guitar, Jon Gray on trumpet, Jeff Jenkinson on organ, and Dameion Hines on drums. Music Appreciation Society invites you, your friends and family to head to Baur’s to get lost in music and experience the “emotions of a musical masterpiece” (Morello, Boston Post Gazette).

Originally from Roanoke, Virginia, Josh Maxey began playing guitar at age 12. After hearing John Coltrane’s A Love Supreme a few years later, he knew that the music touched the heights of human expression and began working to do the same on the guitar. After receiving a solid foundation from his teacher in southwestern Virginia, Maxey relocated to New York City in 1998 where he attended The Jazz and Contemporary Music Program at The New School, studying with such renowned artists as Chico Hamilton who was an early supporter. Maxey also began formal studies with guitarist Rodney Jones who became a friend and mentor. Theirs became a master/apprentice relationship.

Working with Jones on recording projects and performances, Maxey interacted with and learned from such illustrious jazz figures as Dr. Lonnie Smith, Maceo Parker, Idris Muhammad, Donald Harrison and Carl Allen. In addition, social occasions brought Maxey into contact with some of his favorite musicians including George Benson, Doug and Jean Carn, Ed Cherry and Bruce Johnson, all of whom became informal mentors.

These formative experiences found expressive shape in 2011 when Maxey decided to record six albums in 12 months. Incarnate, Approach, The Language of Sound and Spirit, Argument for the Blues, Light Cycles and Cycles of Sound were then released over the following two years. The albums, Blues in the Kitchen and Rhythm of the Sound Current were released next, followed by a retrospective of the series, Completing the Cycle. 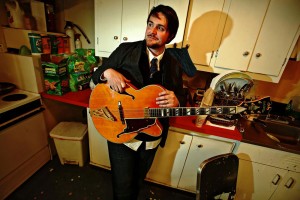 Maxey’s current recording, Celebration of Soul –released on Miles High Records–is the 10th recording in the series, a project that has now encompassed 50 original compositions and 20 different musicians. Drawing on the message of John Coltrane, one of Maxey’s earliest and most significant influences, Celebration of Soul honors the spiritual tradition in jazz improvisation. “For me, sound is a sacred artistic medium,” Maxey says. “Music is able to express the many peaks and valleys of being human, even beyond words. It opens up a space within the listener to identify with a greater state of being and makes it possible for a person to perceive and take their own next steps. I have found that music, and sound is able take us closer to the source of meaning and purpose than I had even imagined.”

After 15 years in New York, in 2013 Maxey and his wife moved to Denver, Colorado where he continues to write, perform, record and teach. His music reflects his many musical influences: John Coltrane, Rodney Jones, Grant Green, McCoy Tyner, Nathan Page, Doug Carn and Jimmy Page, among others.

We welcome Josh Maxey and his quartet back to Baur’s this August for an evening of spiritual jazz that celebrates the soul of fusion and funk. Make a night of it and grab dinner, drinks and then get swept away into musical nirvana.

– “I immediately dug Josh’s compositional flavor and found that his guitar voice ran the gamut of contemporary Jazz Guitar while retaining the traditional spirit of those who came before him.” – Lyle Robinson, Jazz Guitar Life

– “The rhythm section creates a deep pocket on “Cycles of Sound,” with Maxey sounding in control yet exciting throughout. Toe tappers!” – George W. Harris, Jazz Weekly

– “Celebration of Soul is an edgy, upbeat piece. It’s like sounds one might expect from a hybrid of the Chick Corea Elektric Band, Fourplay and Tom Scott. Maxey, Charette and Baird take turns out front, with Noller firmly engaged throughout.” – Woodrow Wilkins, The Jazz Writer