I was born a fiery child
in a Panorama Wide…’

(from the pueblo Indian inspired album Blood Rushing, recorded in Boulder in 2012) 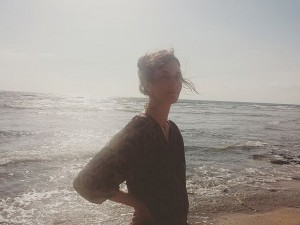 The wonderful singer-songwriter Josephine Foster, born and raised in Colorado, (yet has called Spain home for over a decade) breathes new life into this old world: her many albums are celebrations of myth making, with ancient and modern images, themes, incidents and characters coursing through the songs’ beautiful realized narratives.

Josephine’s new route is a free, chromatic music, a tuneful montana of mind – an expansive harmonic space dominated by Rif mountain on the horizon. As highwater as the music is, as broad the stylistic palette of the musicians, the music really exists in service of the lyrics, in which dissonant notes bend and quaver as wirefork embers, dying without affecting the glowing tonal fire which unites contrary forces in a Moroccan speakeasy.

Josephine has performed for an audience of burros, concerts of Federico Garcia Lorca poems set to music. A music of wandering and a music of roots. An impermanent tradition passed down for generations. Let your loved ones know.

Josephine is not only a captivating songwriter and performer (a former opera student), but also is daring, versatile and irreverent in her approach to subject and form. Beside her own dozen albums of original work she has set poems of Emily Dickenson (Graphic As A Star) and sung German art songs (A Wolf In Sheep’s Clothing), and recently adapted Lorca and Spanish folk/poems (Anda Jaleo & Perlas), as well as releasing an album with The Cherry Blossoms among myriad other projects.

She has performed in diverse locals all around the world, her songs echoing in Opera house to punk rock basement, in folk, jazz, classical, rock festivals, her genre defying music captures the ears and hearts of young and old, and finds its home in a culture that unifies them all.

Josephine Foster’s most recent record No More Lamps In the Morning is a new folk route, a stripped down starsailor vector connecting heller to highwater. Foster, on nylon string guitar, accompanied by Victor Herrero, on Portuguese guitar (and on 2 tracks Gyða Valtýsdóttir’s cello) together weave intimate readings of songs spanning Foster’s songwriting career including selections from recent albums This Coming Gladness (2008) and I’m a Dreamer (2013) and back to Born Heller (2004).

“She effortlessly dissolves barriers between herself and her fellow musicians, between music and listener, between language and expression.”