“Jason Moran [is] shaping up to be the most provocative thinker in current jazz.” – Rolling Stone

Music Appreciation Society is very proud to present this rare and important solo appearance by Mr. Moran in Denver. This is an event of such significant importance that any jazz, piano and aficionado of the arts would be advised to attend both performances. 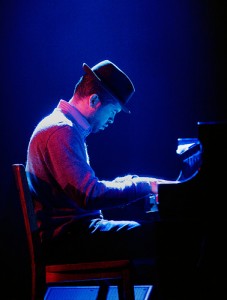 Since his formidable emergence on the music scene in the late 90s, jazz pianist Jason Moran has proven more than his brilliance as a performer. The Blue Note Records recording artist has established himself as a risk-taker and innovator of new directions for jazz as a whole. Currently Mr. Moran serves as Jazz Director of the Kennedy Center in Washington D.C.

In almost every category that matters – improvisation, composition, group concept, repertoire, technique and experimentation – Moran has challenged the status quo, and earned the reputation as “the future of jazz.”

Frequently influenced by the wider world of art as his muse, Moran has found inspiration in edgy 20th painters.

His most recent critically acclaimed release, All Rise: A Joyful Elegy for Fats Waller, dedicated to Fats Waller and the form of popular entertainment that jazz was in his days.

In 2005, his blues homage, Same Mother was released. This same year he received the first ever Playboy Jazz Artist of the Year award. Artist in Residence debuted in 2006 and showcased Moran’s signature brilliance with ambitious undertakings. In the span of one year, Moran accepted and recorded three separate commissions from three pre-eminent and very diverse American arts institutions: The Walker Art Center in Minneapolis, the Dia Art Foundation, and Jazz at Lincoln Center.

Not surprising, the legendary Thelonious Monk had a pivotal role in influencing young Moran to become a jazz musician. In 1981, at the age of six, the Houston native began studying the piano, but longed to quit until he first heard the sounds of Monk, an experience that established an early role model in Moran’s creative development. Moran later honed his musical education at New York’s Manhattan School of Music.

Moran was born in Houston, Texas. He grew up in Pleasantville, Houston, Texas. His high middle-class parents, Andy, an investment banker, and Mary, a teacher, encouraged his musical and artistic sensibilities at the Houston Symphony, museums and galleries, and through a relationship with John T. Biggers and a collection of their own. Moran began training at classical piano playing, in Yelena Kurinets’ Suzuki method music school, when he was six. However, his father’s extensive records collection (around 10,000 in 2004), varied from Motown, to classical to avant-garde jazz.

Music education still plays a central role in Moran’s life. He is on the piano faculty at Manhattan School of Music. He has been lecturer/instructor at Yale University, Dartmouth University, University of Pennsylvania, Eastman School of Music, The Kennedy Center, The New School, New York’s Museum of Modern Art, Banff Center for The Arts, Denmarks’ Vallekilde Jazz Camp, Skidmore and Stanford Jazz Workshop

Although he has the facility to play with breathtaking fleetness, his uniqueness traces to his refusal to be locked into predictable, bebop-based patterns.
—The Los Angeles Times

Moran is like no other pianist at work. His improvisations are dynamic, eruptive, keyed to the compositions at hand.
—Village Voice

When Jason Moran performs with his trio, Bandwagon, these days, he engages in a ritual that befits one of the most independent minds now working in jazz.
—The New York Times

Of course, countless other jazz musicians have tried to reinvent eras past, including the elliptical 1960s, with varying degrees of success. But it’s Moran’s writing, the bane of so many a young pyrotechnic lions, that separates him.
—Newsweek

…Moran has earned nearly unanimous acclaim, demonstrating with wit and imagination the triumphs possible in jazz…
—JAZZ by Gary Giddins and Scott DeVeaux