Music Appreciation Society invites you, your friends, and family to Baur’s to experience the work of French composer Olivier Messiaen’s piece, Quatuor pour la fin du temps  (Quartet for the End of Time), performed by Hsing-ay Hsu, piano; Harumi Rhodes, violin; David Requiro, cello; and Daniel Silver, clairent. Messiaen composed this piece in eight movements while being held prisoner of war in in a German camp during WWII. This fascinating new music masterwork will be performed in Baur’s Salon and is sure to stimulate the senses of all music lovers!

ABOUT THE PIECE by Jessie Rothwell, LA Philharmonic Association

Quartet for the End of Time was originally performed in, very particular circumstances. Near the beginning of World War II Messiaen was summoned for military service. He was captured in May 1940, and taken to a prisoner-of-war camp at Görlitz in Silesia (now mostly within the borders of Poland). In the dead of winter of 1940-41, he wrote the quartet for the instruments on hand among the camp’s inmates: violin, cello, clarinet, and (himself playing) piano. The first performance took place before a large audience of prisoners. It was his most ambitious work so far – a sequence of eight movements that spoke to this Biblical passage from Revelations:

I saw a mighty angel descend from heaven, clad in mist; and a rainbow was upon his head. His face was like the sun, his feet like pillars of fire. He set his right foot on the sea, his left foot on the earth, and standing thus on sea and earth he lifted his hand to heaven and swore by Him who liveth for ever and ever, saying: There shall be time no longer; but on the day of the trumpet of the seventh angel, the mystery of God shall be finished.

Messiaen’s understanding of this passage speaks not to a vision of the Apocalypse, nor to his own situation as a prisoner, but to the idea of the end of Time as the end of past and future and the beginning of eternity. The music was meant to be an extension of the Angel of the Apocalypse’s words, and one with particular musical meaning, for Messiaen was no longer interested in time as rhythm. He did not want to hear steady rhythms like military drums, and instead aspired to rhythms outside of time.

Since making her stage debut at age 4, Chinese pianist Hsing-ay Hsu (“Sing-I Shoo”) has performed at such notable venues as Carnegie Hall, the Kennedy Center, Alice Tully Hall at Lincoln Center, and abroad in Asia and Europe. Upon entering her freshman year at Juilliard, she won the William Kapell International Piano Competition silver medal. Hsu was also winner of the Ima Hogg National Competition First Prize, the prestigious Juilliard William Petschek Recital Award, a McCrane Foundation Artist Grant, a Paul & Daisy Soros Graduate Fellowship Award, and a Gilmore Young Artist Award. She was also named a US Presidential Scholar of the Arts by President Clinton at the White House.

Acclaimed by the New York Times as a “deeply expressive violinist,” Harumi Rhodes has gained broad recognition as a multifaceted musician with a distinct and sincere musical voice. Her generosity of spirit on stage is contagious, making her one of the most sought after violinists and chamber musicians of her generation. As a founding member of the Naumburg Award–winning ensemble, Trio Cavatina, Rhodes has performed at the Philadelphia Chamber Music Society, Isabella Stewart Gardner Museum in Boston, Pittsburgh Chamber Music Society, Wolf Trap (Wash D.C), and San Francisco Performances, as well as its debut at Carnegie Hall’s Weill Recital Hall in 2009. Continuing to build its reputation as one of today’s leading piano trios, Trio Cavatina has been touring internationally over the last few seasons with recent notable performances in Pablo Casals Symphony Hall in San Juan, Puerto Rico and Filharmonija Hall in Vilnius, Lithuania.

Praised by the Washington Post for his “sense of freedom and extraordinary control” clarinetist Daniel Silver is active as a soloist, chamber musician, orchestral performer, clinician and teacher. He has served as principal clarinet of the Baltimore Opera Orchestra, the Washington Chamber Symphony (Kennedy Center) and the National Gallery Orchestra. From 1980 to 1987 he was the principal clarinet of the Hong Kong Philharmonic, appearing often as a concerto soloist. From 1988-2000 he was a member of the Contemporary Music Forum of Washington D.C. in residence at the Corcoran Gallery, taking part in premiere performances of many works by noted composers.

Lucky ticket holders will get to experience Messiaen’s Quartet for the End of Time in Baur’s intimate and acoustically superior Salon. Get your tickets today and make Sunday, October 2 a day to remember. 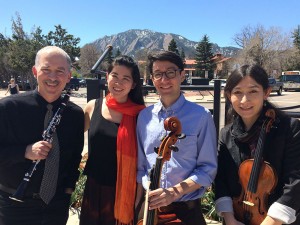 – “An explosion of energy…” – The New York Times 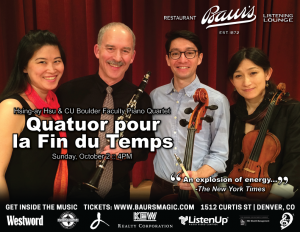