After 50+ years of running the Denver Folklore Center, which he founded in 1962, Colorado Hall of Fame Inductee (2012) Harry Tuft is pursuing his original dream of making music. Accompanied by Rich Moore and special guests, Mr. Tuft will be singing and picking his guitar for an evening of folk, country, R&B, and his favorites from “Great American Songbook.” Music Appreciation Society invites you, your family and friends to celebrate and acknowledge the godfather of the Denver folk community, Harry Tuft, in a rare live performance on Saturday, November 12.

Harry Tuft started his singing career with the Dartmouth College Glee Club. Listening to recordings by Leadbelly, Pete Seeger, and Bill Broonzy, he quickly took up guitar, and upon graduation was a regular in the Sunday “hootenannies”s at the legendary Gilded Cage Coffeehouse in his native Philadelphia. Skiing in Colorado led to gigs in Georgetown and Aspen, and a permanent move to Denver, where he opened the Denver Folklore Center. While running the music store, Harry engaged in a series of musical endeavors. He was a radio disc jockey on a 70’s free-form radio station, he has sung and recorded with Steve Abbott and Jack Stanesco in the popular Denver band, Grubstake, and he also did numerous jobs as a soloist, and with a variety of free-lance bands.

In 1978 he recorded his first album, Across The Blue Mountains, for Folk Legacy Records. “This was a classic folk album that featured traditional music and a half dozen songs by contemporary singer-songwriters.”

In 2012 popular demand and his own musical ambitions led to his current album, Treasures Untold. “I retain a keen interest in ballads, traditional and contemporary, unaccompanied and with instrumentation. I continue to respond to songs new to me, with an eager desire to learn them. As a result that album is a mix of folk, country, R & B and the “Great American Songbook,” a mix which I continue to expand on today.

Harry Tuft is a household name in the Denver folk community and to have him perform at Baur’s is truly an honor. Purchase your tickets today to be part of this authentic night of Denver folk music! 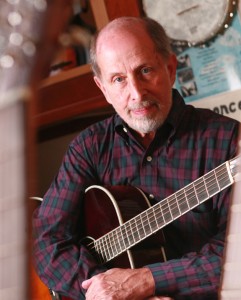