The Music Appreciation Society and Denver Eclectic Concerts are excited to announce the world premier of a hot new ensemble, Grande Orquesta Navarre. This newly formed group is made of former members of the acclaimed tango ensemble Extasis including Sue Cahill, Evan Orman, Tom Hagerman of DeVotchKa and Sara Parkinson. Also joining the orquesta is Utah Symphony’s principal cellist, Rainer Eudeikis. This salon orchestra will perform new transcriptions of classical music with a gypsy tango twist. 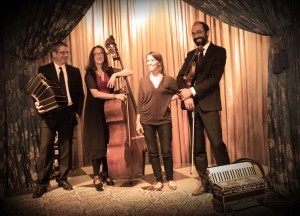 More about the members of Grande Orquesta Navarre:

Bassist, composer, and educator Susan Cahill has been a member of the Colorado Symphony Orchestra since 1997 and has appeared as soloist with the CSO and throughout the country.

Susan has appeared with the American roots band The Boulder Acoustic Society, is a former member of the acclaimed Argentinian tango ensemble Extasis, which performed on three continents. Susan’s compositions have been featured at Festival Mozaic and The Colorado College. She is the Co- director of Denver Eclectic Concerts, a series dedicated to fusing classical chamber traditions with new forms of art music, spoken word and performance.

A Chicago native, she is a graduate of Indiana University’s Jacobs School of Music, where she studied with Bruce Bransby and Lawrence Hurst. Her bass was made by Guiseppe Santori of Turin in 1823.

Born in Colorado, Evan Orman studied cello at the North Carolina School of the Arts, the Banff Centre In Canada, and the New England Conservatory. His teachers include Colin Carr, Eleanor Shoenfeld and Robert Marsh. He has performed in master classes for Yo Yo Ma, Janos Starker and the Guarneri Quartet and has worked closely with violinist Louis Krasner and composer Iannis Xenakis.

An enthusiast of Argentine tango, Evan has studied tango music and the bandoneón (a type of concertina) in Buenos Aires (through a grant from Tango Colorado) and plays the bandonéon in his Denver-based group, Extasis. His interest in the bandoneón, and in the music of Astor Piazzolla (the Argentine bandoneónista and composer) prompted him to acquire his first instrument in 1996. He has studied with Raul Jaurena, of the New York Tango Trio and in Buenos Aires with Camillo Ferrero, of Orquesta El Arranque. On bandoneón, he has performed as soloist with the Camerata San Antonio, Cellisimo (a group comprised of cellists from the Colorado Symphony), the Colorado Symphony Orchestra, the University of Colorado Symphony Orchestra, the Chicago Chamber Musicians, Virtuosi Chicago Chamber Orchestra and the Columbus, Georgia Symphony Orchestra. Along with Extasis violinist, Claude Sim, Evan has performed with the band Devotchka on several occasions. He performs on two bandoneóns: an Alfred Arnold, ca. 1935 and a modern instrument by Carlfelder Bandoneón and Concertina Fabrik (AA) that was made in 2011.

In addition to his musical activities, Evan has been successful as a maker and restorer of bows for stringed instruments and currently maintains a shop in Denver. He is also a member of the American Federation of Violin and Bow Makers.

Tom Hagerman is best known for his multi-instrumentalist role in the Denver based rock band DeVotchKa. He has performed on recordings by M Ward, Crooked Fingers, She and Him, Neko Case, Bettye Lavette, Calexico and Sage Francis, among others and has written many orchestral arrangements for the Colorado Symphony’s pop shows that have included Devotchka, The Lumineers, Gregory Alan Isakov, The Flobots, and Amos Lee. He is a Colorado native, a graduate of the music school at the University of Colorado Boulder, and a product of music education in public schools.

Pianist Sara Parkinson has performed as soloist, chamber musician and vocal collaborator throughout the United States and abroad: from the Ellie Caulkins Opera House in Denver, to Boston’s Jordan Hall and the Swiss Alps. She has performed at several national events including the Suzuki Association of the Americas Conference, CMS Regional Conference, NATS National Conference, TedX Talks at Mile High, and in recital with the concert master of the National Repertory Orchestra and soprano Anna Christy. Her performances have been heard on New England and Colorado Public Radio.

Sara has held the position of staff pianist at Cornell College in Iowa, the Rocky Ridge Music Center (Estes Park, CO), and the University of Colorado Boulder. Equally comfortable with vocal or instrumental collaborations, she spent a season as chorus master and music director for the Young Artists at Emerald City Opera in Steamboat Springs. She also served as Music Director for the premiere performance of Leanna Kirchoff’s chamber opera, The Clever Artifice of Harriet and Margaret, at CU-Boulder in 2013. Orchestral keyboard experience includes performances with the Colorado Music Festival Orchestra, Cheyenne Symphony, and the Colorado Ballet Orchestra. She is a member of the Central City Opera Ensemble and has been a pianist for Boulder Suzuki Strings since 2006.

A devoted advocate for new music, Sara was an active performer in the Center for New Music at the University of Iowa, the Callithumpian Consort under the direction of Stephen Drury in Boston, and the Pendulum Concert Series in Boulder. As a member of Liria Duo with longtime partner, soprano Emily Murdock, she recently released a recording of songs by American composer Libby Larsen. The album, Songs of Her Self, is a culmination of over two years of close work with the composer.

Sara Parkinson received her Bachelor of Music in Piano Performance with academic honors at the University of Iowa and Master of Music in Piano Performance with honors from the New England Conservatory of Music in Boston. Upon graduation, she spent two years abroad teaching piano at a private boarding school in Switzerland. In 2010, she completed her Doctor of Musical Arts degree in Collaborative Piano at the University of Colorado Boulder where she held a full assistantship with duties in both the opera and instrumental departments. Festival appearances include Aspen, Musicorda Chamber Music Festival (MA), and Music Academy of the West in Santa Barbara. The winner of numerous awards and scholarships, she is also a member of Pi Kappa Lambda. Her teachers have included Daniel Shapiro, Sergey Schepkin, Ksenia Nosikova, Victor Rosenbaum and Anne Epperson.

Dr. Parkinson joined the piano faculty at Metropolitan State University of Denver in 2012 and currently serves as Music Director at St. Aidan’s Episcopal Church of Boulder. When not at the piano, you can find Sara indulging in her husband’s pastries while chasing her two young sons and their cat, Rocky.

Rainer Eudeikis joined the Utah Symphony/Utah Opera as Principal Cellist starting in the 2014-2015 season, having been recently appointed by Maestro Thierry Fischer while still a student at the Curtis Institute of Music. He is also Principal Cellist of the Central City Opera, a position he has held since 2012.

Past performances include the U.S. premiere of renowned composer Bright Sheng’s “The Blazing Mirage” for Solo Cello and String Orchestra (Bright Sheng conducting) at Music From Angel Fire, solo appearances with the Indiana University Chamber and Baroque Orchestras, performances with the Starling Chamber Players (alongside IU Professors Alex Kerr and Eric Kim), a tour of Andalucía, Spain as Guest Principal Cellist of the Classical Concert Chamber Orchestra, a live film-scoring project with Dallas-based contemporary music ensemble Voices of Change, and other recital appearances around the United States.

He has participated in numerous international festivals, including the Schleswig-Holstein Musik Festival (Germany), Britten-Pears Programme at Aldeburgh (UK), and the Académie Musicale Internationale de Vaison-la-Romaine (France). Rainer was a two-year fellowship recipient at the Aspen Music Festival and School, and was a member of the New York String Orchestra at Carnegie Hall (directed by Jaime Laredo), where he was Principal Cellist in 2011.

Also an enthusiastic performer of Baroque and Classical repertoire on period instruments, Rainer has studied closely with renowned Baroque violinist Stanley Ritchie. He has performed on period instruments in concerto, recital, and orchestral settings, and has worked under conductors Gary Wedow, Paul McCreesh, and Nicholas McGegan, among others.

Born in Texas in 1990, Rainer began cello studies at the age of six. Following studies in Colorado with Jurgen de Lemos, he attended the University of Michigan as a student of Richard Aaron, completing his B.M. in 3 years with highest honors. He received his M.M. from Indiana University’s Jacobs School of Music, where he studied with Eric Kim. In May 2014, Rainer completed his Artist Diploma at the Curtis Institute of Music, studying with Carter Brey and Peter Wiley.

Music Appreciation Society is ecstatic to partner with Denver Eclectic Concerts presenting these five diverse and talented artists when they take the stage in Baur’s Historic Salon for what is sure to be an exciting night of chamber music. Dinner, dessert, beverages and small plates are available in the restaurant before or after the show as well as during intermission. Come celebrate eclectic, live, acoustic music at its finest and enjoy the wonderful acoustics and beautiful and intimate setting.

Praise for the 2010 performance of the the Bottesini Concerto “A showcase for the amazing Susan Cahill, (she) made the double bass sing…with a marvelously disembodied, woody timbre.” And of her 2008 performance of Jacob Druckman’s Valentine “Breathless.”

“The bandoneon defined the tango quartet and is a type of concertina instrument particularly popular in Argentina. Some would say it looks like and accordion but the key difference being that the direction of button movement is parallel with the direction of the bellows movement with the bandoneon.”