Making their second appearance at Baur’s, Music Appreciation Society and Denver Eclectic Concerts is thrilled to bring back Grande Orquesta Navarre. This new group is made up of Sue Cahill, Evan Orman, Sara Parkinson, and Tom Hagerman of DeVotchka.  GON combines the heartbeat of an old cabaret orchestra with the modern feel cutting edge new music, classical remixes and  nuevo tango. Their unique style is at the same time a throwback and a revelation. We invite you, your family and friends to head to Baur’s to experience this salon orchestra in a beautiful, historic setting. Dinner, dessert, beverages and small plates are available in the restaurant before or after the show as well as during intermission. Call (303) 615-4000 for reservations. 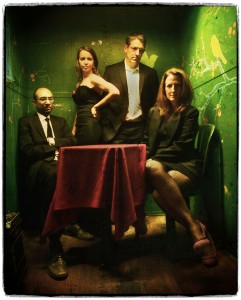 TOM HAGERMAN: Tom Hagerman is best known for his multi-instrumentalist role in the Denver based rock band DeVotchKa. He has performed on recordings by M Ward, Crooked Fingers, She and Him, Neko Case, Bettye Lavette, Calexico and Sage Francis, among others and has written many orchestral arrangements for the Colorado Symphony’s pop shows that have included DeVotchka, The Lumineers, Gregory Alan Isakov, The Flobots, and Amos Lee. He is a Colorado native, a graduate of the music school at the University of Colorado Boulder, and a product of music education in public schools.

EVAN ORMAN: Born in Colorado, Evan Orman studied cello at the North Carolina School of the Arts, the Banff Centre in Canada, and the New England Conservatory. An enthusiast of Argentine tango and founding member of Denver’s Extasis, Evan studied tango music and the bandoneón (a type of concertina) in Buenos Aires through a grant from Tango Colorado. He worked  with Raul Jaurena, of the New York Tango Trio and in Buenos Aires with Camillo Ferrero, of Orquesta El Arranque. In addition to his musical activities, Evan is a maker and restorer of bows for stringed instruments and currently maintains a shop in Denver. He is also a member of the American Federation of Violin and Bow Makers.

SARA PARKINSON: Sara Parkinson is a pianist, conductor and vocal coach. An Iowa native who came to Colorado via Boston and Switzerland, Dr. Parkinson has served on the staff and faculties at Cornell College, Leysin American School, CU-Boulder, and MSU Denver. She frequently performs with Central City Opera Ensemble,  Colorado Ballet Orchestra, and Liria Duo, who worked closely with composer Libby Larsen. Sara first ventured into tango with Extasis, and has since devoted herself to the quirky repertoire of Grande Orquesta Navarre.

Praise for the 2010 performance of the the Bottesini Concerto “A showcase for the amazing Susan Cahill, (she) made the double bass sing…with a marvelously disembodied, woody timbre.” And of her 2008 performance of Jacob Druckman’s Valentine “Breathless.”

“The bandoneon defined the tango quartet and is a type of concertina instrument particularly popular in Argentina. Some would say it looks like and accordion but the key difference being that the direction of button movement is parallel with the direction of the bellows movement with the bandoneon.”