KBNO, KUVO and Music Appreciation Society brings the best of Latin America to Denver. We will travel to Bolivia with the ‘provocative and brilliant’ artist, Gian-Carla Tisera. She will present stunningly bold and daring crossings between opera, Latin American folk music, jazz, political song, and roots music sure to delight spanish speakers, latin music fans in the latin and anglo communities of Denver. Come show your support of this special International programming you will only find here – this evening – at Baur’s Listening Lounge.

In August, 2014 Gian-Carla released her debut album, Nora la Bella, which was chosen Album of the Week by Latin Jazz Net, and of which critics rave: ‘You’ve never heard anything like Gian-Carla Tisera’s Nora la Bella…it’s quite possibly a game-changer…you can only welcome it entirely, and you can’t help but admire her bravado. This is Tisera’s jazz opera, and it is righteous’ (The Examiner). In 2014 Nora la Bella made the charts for the Grammy Awards in four categories: Album of the Year, Best New Artist, Best Latin Jazz Album and Best Music Video. co-produced by Grammy nominated Steinway jazz pianist and composer Elio Villafranca who will be in Denver with his Trio to back Gian-Carla in this ground-breaking performance. 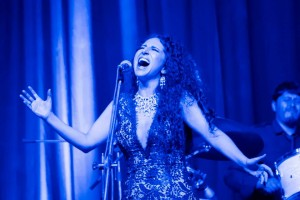 In 2014 Tisera performed at Symphony Space of Lincoln Center and she released Nora la Bella at the Public Theater in New York City and at Americas Society – the prestigious concert hall founded by Rockefeller and dedicated to Latin American culture in the city of New York. That same year Tisera received the Medal of Honor to Merit from the Plurinational State of Bolivia because ‘as a woman and a worthy representative of Bolivia she shows inspiration and motivation for contemporary generations.’

Tisera’s music is an extraordinary result of her story and her personal search. She was raised in Cochabamba, Bolivia and studied music at Instituto Eduardo Laredo. She later moved to Los Angeles, California, where she completed her Undergraduate and Masters Degree in Opera Performance at the University of Southern California. Since 2008 she lives in New York, where she arrived as a traditional opera singer and paradoxically, found herself re-united with the folk music of her homeland. In New York she also discovered the liberating force of Jazz.

“I had this idea for a new kind of opera, something different, accessible and fresh. I also thought: how can I express my immigrant experience? How can I speak of my perspective as a Bolivian woman, as an American woman looking back at my country from a distance? With this fusion and my musical choices I challenge the perceptions that separate artists, especially classically trained artists, from their communities and from the music that speaks to the modern world. I am pushing the vanguard but to bring audiences to experience the greatness of opera as it relates to modern themes of love, politics and culture. I long to present opera not like an old, precious form but instead, as a vibrant, contemporary style that speaks to our concerns now.”

In “Nora la Bella” Tisera sings in English, Spanish, Italian and Quechua, one of the main indigenous languages of Bolivia. The album is produced by Tisera and by twice Grammy nominated Cuban pianist, Elio Villafranca. Throughout the recording Tisera is joined by a dream team of world renowned musicians, including Villafranca at the piano, trumpeter Diego Urcola, and five-time Grammy Award-winning bassist, John Benitez, among others.

Recent progressive projects include Luminosa Project, her new duo with pianist A.J. Khaw in which classical and jazz idioms color traditional and non-traditional songs with socio-political artistic expressions and via thought-provoking collaborations with world music and experimental artists.

Join us to celebrate and participate in this amazing artistic vision on this special Sunday in Denver with Gian-Carla Tisera – In Concert  backed by the Steinway Artist – Elio Villafranca Trio – only at Baur’s.

Of her performance at the Edinburgh International Music Festival in 2010: “Gian-Carla (sung) with thrilling yet superbly refined emotion.”

“A performer with stunning power and warmth”.

Of Tisera’s performance at Symphony Space: “With her power and vocal clarity and with a combination of glamour and grits, Tisera incorporates it all…deliciously waxing and waning…a jewel of an artist.”