Baur’s and KUVO host a very special evening with Jazz patriarch Ellis Marsalis, who is regarded as the premier Jazz pianist in New Orleans. Father of the well-known brothers Wynton and Branford. This Thursday evening is presented by Music Appreciation Society benefiting the Colorado Conservatory for the Jazz Arts. This rare opportunity to experience in person the playing of this influential artist, educator and father is sure to draw attention of music lovers of all ages. Lucky ticket holders will have the experience of a lifetime hearing the Baur’s Steinway played by a true master for two shows only.

Born on November 14, 1934, his formal music studies began at age eleven at the Xavier University Junior School of Music. After high school, Marsalis enrolled in Dillard University (New Orleans, LA) as a clarinet major. He graduated in 1955 with a Bachelor of Arts degree in Music Education. Marsalis spent the next year working as an assistant manager in his father’s motel business. 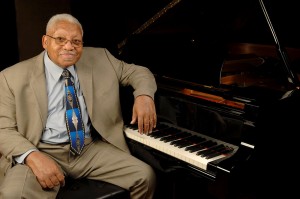 The following year, Marsalis joined the U.S. Marine Corps. While stationed in outhern California he honed his pianist skills as a member of the Corps Four, a Marines jazz quartet that performed on television (“Dress Blues,” named for the formal Marine Corps uniform and broadcast on CBS) and radio shows (“Leatherneck Songbook”).  Both shows were used to boost recruiting efforts. After completing his Marine Corps duty, Marsalis returned to New Orleans and married Dolores Ferdinand, a New Orleans’ Native, Ellis and Dolores raised six sons; Branford, Wynton, Ellis III, Delfeayo, Mboya and Jason.

In 1964 Marsalis, his wife Dolores and, at the time, four sons, moved to the small rural town of Breaux Bridge, Louisiana, where he spent two years as a school band and choral director at Carver High School.  Returning to New Orleans in 1966, he began freelancing on the local music scene.  Between 1966 and 1974 Marsalis would perform at the Playboy Club (New Orleans), Al Hirt nightclub, Lu and Charlie’s nightclub, Storyville nightclub, Crazy Shirley’s as well as a teaching profession, in 1967, as an adjunct professor of African American Music at Xavier University (New Orleans, LA).

As the family continued to grow, Marsalis continued his educational pursuits, attending Loyola University’s (New Orleans, LA) Master’s Degree program in the early summer session of 1974. He would also successfully interview for a teaching position at a new Magnet High School for the Arts, the New Orleans Center for Creative Arts (NOCCA), and be hired as an instructor for the Fall Semester (1974). Marsalis would spend the next twelve years at NOCCA as an instrumental music teacher with a Jazz studies emphasis.

In 1986, Marsalis accepted a teaching position at Virginia Commonwealth University (Richmond, Virginia), serving as coordinator of Jazz Studies for two of his three years there.  In 1989, he returned to New Orleans to become the first occupant and irector of the Coca Cola endowed Chair of Jazz Studies at the University of New Orleans.  During his tenure at UNO he helped fellow colleague Charles Blancq develop a campus performance center called the “Sand Bar”.  Marsalis would also develop a Jazz Orchestra.  On August 10, 2001, Marsalis officially retired from the University of New Orleans after twelve years of dedicated service.  His retirement was celebrated by a very rare performance of Branford, Wynton, Delfeayo and Jason Marsalis at the UNO arena.

Marsalis continues to be active as a performing pianist leading, and occasionally touring with his own quartet. He has several recordings on the CBS-SONY label and currently releases recordings on his own recording label, ELM RECORDS, developed with his wife Dolores and their son Jason.

Ellis Marsalis represents the history of American music, as his son, Delfeayo Marsalis said “when he plays, it is the sound of truth. That’s a sound we’re all trying to get to”. His son Jason said, “He was interested in what it is a person can learn, how a person can be the best they can be.” Marsalis is a performer and generous ambassador of music. Join us with your entire family to experience the magic that has inspired a generation of musicians.

“Ellis really had a vision of what jazz education needed to be. And it wasn’t about notes and half notes. It was about the cultures that feed into jazz and the environment of disciplined innovation that jazz greatness has to have.”

“As jazz’s best-known father figure, the senior Marsalis has four noted musical offspring: Branford, Wynton, Delfeayo and Jason. But if you consider all the musicians he’s taught or mentored, his clan is even more extensive, diverse and influential.”