Latin Jazz fans celebrate the appearance in Denver of Elio Villafranca who is at the forefront of the latest generation of remarkable Cuban pianists, composers and bandleaders that for several years has been making major creative contributions to the international development of modern jazz. In the 2010 Grammy Awards he was nominated in Best Latin Jazz Album of the Year. Elio Villafranca is an official Steinway Artist. Baur’s is honored to feature Elio with his Trio unveiling new work and selections from his acclaimed recordings, brought to you by KUVO, KBNO and your Music Appreciation Society.

Born in the Pinar del Río province of Western Cuba, pianist and composer Elio Villafranca was classically trained in percussion and composition at the Instituto Superior de Arte in Havana, Cuba. Since his arrival in the U.S. in late 1995, he has been involved in jazz and Latin jazz scenes on both the East and West Coasts. Based in New York City, he is resident professor at Temple University in Philadelphia, PA. 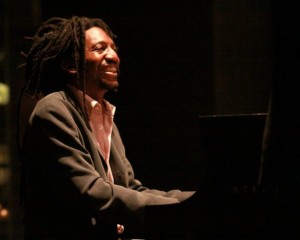 He has released numerous albums as a bandleader and collaborator that were each well received. Currently touring in support of albums “Dos Y Mas” with percussionist Arturo Stabile and with his band the Jazz Syncopators new live album “Caribbean Tinge” and working on new material with his Trio and Quartet.

His album, “The Source in Between”, 2007, remained in the top 10 of the JazzWeek World Top 50 Chart for eleven weeks, and his first album, “Incantations/Encantaciones”, was ranked amongst the 50 best jazz albums of the year by JazzTimes magazine in 2003. In 2008 Elio Villafranca was also nominated by The Jazz Corner as pianist of the year and he received the Jazz Twirlie Nomination by Dick Crockett, of “The Voice” at 88.7FM, for his album The Source In Between.

That year, Mr. Villafranca was also honored by BMI with the BMI Jazz Guaranty Award and received the first NFA/Heineken Green Ribbon Master Artist Music Grant for the creation of his Concerto for Mariachi, for Afro-Cuban Percussion and Symphony Orchestra. Villafranca was also pianist in the CD La Guerra No by John Santos Y El Coro Folklorico Kindembo, which was nominated in the 2010 Grammy Awards as Best Traditional World Music Album. Over the years Elio Villafranca’s music has featured jazz master artists such as Pat Martino, Jane Bunnett, Terell Stafford, and Eric Alexander, among other notable instrumentalists.

Baur’s is delighted to bring this important International talent to Denver for a one-of-a-kind evening of sophisticated, Latin flavored Jazz with the brilliant playing of Elio Villafranca on the “peoples piano”  in the Listening Lounge on the very musical Monday!

“Villafranca is an amazing soloist…. In a classical setting, [he] impresses with sweet precision rather than machismo.”

“… Villafranca emotes an expressive, emotional quality enhanced by his technically brilliant approach to the keyboard and his rhythmically complex original compositions..”

“This is, quite simply, craftsmanship at its finest and it goes beyond mere technique… The other outstanding aspect of the music is how inspired the compositions are.” – Latin Jazz Network

“the songs on the recording feel inspired, passionate, and innovative, yet familiar.” – Whole Music Experience

“These open-minded musical sculptors created this music for those with open ears to absorb and enjoy it.” – All About Jazz