Once again, Baur’s will explode with a hot and spicy night of Latin music featuring Calixto Oviedo’s Cuban Jazz Train. This mix of Afro Cuban and New Orleans Jazz is a revival of classic Latin infused with new melodies, harmonies, and danceable Cuban rhythms. Joining them this performance is vocalist Lily Hernandez! Music Appreciation Society invites you, your friends and family to come aboard the “Cuban Jazz Train” for a truly cultural experience of Cuban, Caribbean Latin music.

Calixto Oviedo: Calixto Oviedo is a Grammy nominated artist (La Rumba del Siglo, 2000) Born in Cuba, Calixto Oviedo’s career spans 38 years. He started his musical studies when he was eight years old at the Caturla Music School in Havana, later graduating from the National School of the Arts, where he played with many different bands and several soon to be famous Cuban musicians. He also was NG La Banda’s drummer during the period that produced their greatest recordings. In the mid-90’s, Oviedo became an independent musician and relocated to Sweden, where he became Europe’s  drummer of choice on bands and groups playing all genres, from classical jazz to timba. After years of participating as drummer and/or percussionist in dozens of recordings, Oviedo is currently a member of the music faculty at the California State University at Los Angeles (CSULA) as a percussion professor where he is fulfilling a long standing dream, to direct, perform and record a CD with his own modern version of legendary Jelly Roll Morton’s “Latin tinge.” 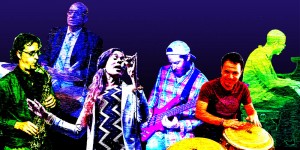 Lily Hernandez: Latin Grammy nominated, Lily Hernandez is a Cuban singer of Camagueyan origin. She was undiscovered until Calixto Oviedo recognized her talent in his own house while listening to a demo. In a few short years, her career took off. She has performed in jazz festivals in Spain, Austria, Germany, Scandinavia (Sweden, Finland, Norway and Denmark) Italy, and the USA. She has also played at various jazz clubs in Europe and the USA. She was nominated for a Latin Grammy for her participation on the CD  Raul Lara y Sus Soneros. She has also received honors from Salsa stars of Puerto Rico and New York such as Jerry Rivas and Ralph Irizarry who named her THE AMAZON OF SALSA.

Andrew Vogt: Andrew Vogt started playing Saxophone in elementary school in Lincoln, Nebraska.  Since then he has added clarinet and flute to his arsenal and has performed professionally at well over 5,000 events.  He earned a degree in music from the University of Nebraska and is now a freelance musician/music educator in Fort Collins, Colorado. In the late 1990’s Andrew was one of the top musicians competing for the Cognac Hennessy Jazz Challenge.He then spent three years sailing the seas on cruise ships performing every night for hundreds of guests. At the turn of the new millennium he moved his horns and himself to the beautiful land of Colorado. Andrew specializes in high energy, exciting jazz but also performs in a variety of different funk, soul and R&B bands.

Victor Mestas: Born and raised in Caracas, Venezuela, Victor Mestas, 2010 Latin Grammy Winner, has more than 80 recordings to his professional credits.  Victor has accompanied an array of world renowned singers including Julio Iglesias Uruguay/Argentina tour in 2010, Soledad Bravo, Cheo Feliciano, Luis Enrique, and many others. Mestas has performed (as pianist/keyboardist/arranger/producer) for renowned bands in Venezuela, including Guaco, Caracas son 7, and El trabucovenezolano (Venezuelan Salsa All-Stars). Since 2001, Victor has been an endorsement artist for YAMAHA musical products in Venezuela.

Juan Moreno: Juan Moreno is the youngest Colorado professional Latin percussionist. Growing up playing at jazz band in high school, then begin playing professionally at the age of 17 after a few years. His versatility and understanding of a wide range of music styles, made him moved out of state and take a huge step in LA for a while to play with the master Calixo Oviedo and other local bands. He has performed with various popular artist such as Sonora Dinamita, Elvis Crespo, El gringo de la bachata and others. Juan has also played some of the most important jazz festivals in Colorado: Five Points Jazz Festival, Winter Park Jazz Festival, Denver Botanic Garden Summer Concerts, and Snow Mass Jazz Festival.

Mike Facey: Vermont native Mike Facey’s lifelong fascination with music was sparked at an early age by his parents’ readily accessible record, tape, and cd collection. Initially learning guitar, Mike went on to study both upright and electric bass earning a BM in Jazz Studies from the University of Colorado. After years of performing and teaching on the front range of Colorado, touring, and playing internationally on cruise ships, Mike relocated to the Roaring Fork Valley. Now, Mike plays and teaches throughout the Aspen, Colorado area, while maintaining a busy touring and recording schedule.  On top of performing as a solo artist and maintaining an active freelance schedule, Mike plays regularly with vocalists Josefina Mendez and Alycia Vince, and with the bands Hot Eagle, Salem, and Davis.

Cuban Jazz Train: According to Latin music expert Carlos Quintana, “the foundations of Latin Jazz were consolidated during the 1940s and 1950s and there is evidence about the inclusion of Afro-Cuban sounds into early Jazz. To this regard, Jazz pioneer “Jelly Roll Morton” used the term “Latin tinge” to make a reference to the rhythm that characterized some of the Jazz that was played in New Orleans at the beginning of the 20th century.

This Latin tinge was a direct reference to the influence that the Cuban Habanera, a genre that was popular in the dance halls of Cuba at the end of the 19th century, had in the making of some of the local Jazz expressions that were produced in New Orleans. Along those lines, the proximity between New Orleans and Havana also allowed Cuban musicians to borrow elements from the early American Jazz”. Musicians build on each other’s offering and work together to move the song along and create a sound that’s inventive and collective. In Cuba, this improvisational approach was –and still is– known as “descarga”.

Based on that well-documented history, the Cuban Jazz Train, under the direction of Calixto Oviedo, was formed by a group of accomplished musicians whose main motivation was to revive these styles and to generate their own new “tinge.”

Music Appreciation Society and KUVO are ecstatic to present the music of the Americas – Latin, Carribean, Cuban cultural evening aboard Calixto Oviedo’s Cuban Jazz Train.  This fusion of International Jazz from Cuba is sure to heat up the room and have you on your feet dancing. Head to Baur’s on May 19 when this very volatile explosion of talent arrives in Denver.

– “This is exactly how you would expect Afro-Cuban music to sound in this day and age; romantic but without an ounce of sentimentality…” 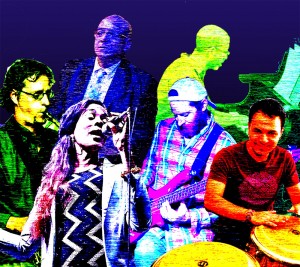