Colorado Symphony’s new music director Brett Mitchell, Colorado Symphony associate concertmaster Claude Sim and MAS Eclectic director and Colorado Symphony bassist Sue Cahill put on their jazz hats for the MAS Eclectic Benefit Concert on Sunday, April 29th. They will showcase their own music along with that of George Gershwin and George Shearing. Help support the continuation of the best live, Eclectic music in Denver in the intimate setting of Dazzle at Baur’s.

Hailed for delivering compelling performances of innovative, eclectic programs, Brett Mitchell began his tenure as Music Director of the Colorado Symphony in September 2017. Prior to this appointment, he served as the orchestra’s Music Director Designate during the 2016-17 season. Mr. Mitchell concluded his tenure as Associate Conductor of The Cleveland Orchestra in September 2017. He joined the orchestra as Assistant Conductor in 2013, and was promoted to Associate Conductor in 2015, becoming the first person to hold that title in over three decades and only the fifth in the orchestra’s hundred-year history. In these roles, he led the orchestra in several dozen concerts each season at Severance Hall, Blossom Music Center, and on tour.

Chicago native Claude Sim enjoys a varied career as a chamber musician, orchestral principal, soloist, and multi-genre performing artist. He studied violin performance at the Oberlin Conservatory of Music (BM ’99) with Greg Fulkerson, Almita Vamos, and Roland Vamos. At age 21, he was appointed Associate Concertmaster of the Colorado Symphony Orchestra under music director Marin Alsop. His work as featured soloist with the orchestra has earned praise and critical acclaim from the Denver Post and Rocky Mountain News 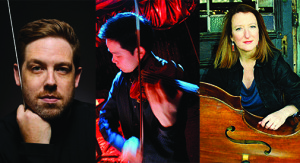