Music Appreciation Society invites you, your family, and friends to experience the soul fueled blues of Missy and Heine Andersen. Missy Andersen and her band craft addictive rhythms, and understand how musical space defines the contours of tasty music. Join us at Baur’s and allow whatever part of your body keeps the beat to tap and bob along to the music of Missy & Heine Andersen.

Born in Detroit and living in San Diego by way of Queens, New York, Missy Andersen follows her self-titled debut with a timeless follow-up of blues going straight to the spirit and body. With her band leader/guitarist/husband Heine Andersen, she has again created a personal soundtrack for good times and the pain and joys of love. 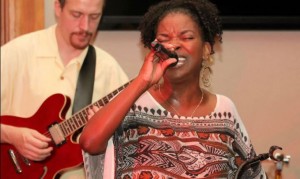 In the Moment has 11 varied tracks including 8 originals, five of which are penned by the Andersens. Recorded with heavy hitters Bill Stuve (bass), Marty Dodson (drums), Sue Palmer (piano), Ben Moore (organ), and guest appearances by Nathan James and James Harman, the CD takes the listener down a lush musical path. Beginning with the Louis Jordan-esque “Rent Party” and ending with a gospel-tinged remake of Snooks Eaglin’s “I’ve Been Walkin’,” the disc has something for everyone. From Chicago blues to New Orleans second-line beats, slow blues and soul ballads, Memphis soul to funky Meters-like rhythms. It’s all in there and it’s easy to understand where those wide-ranging influences come from.

As a child, Missy was exposed to her parent’s extensive music collection that included soul, R&B, blues, jazz, and gospel. It didn’t matter what the genre was as her favorite songs were always the ones that told a story. Later she would discover Dinah Washington, Sarah Vaughn, and Billie Holiday and that eventually lead her to O.V. Wright, Bobby Bland, Little Milton, James Carr, Ray Charles, Ann Peebles, and Irma Thomas.

Missy began fronting bands in her early teens, playing local venues which quickly lead to doing studio sessions and performances as a background vocalist. She continued honing her skills and moved to San Diego, California where she met Heine, a seasoned musician visiting from Denmark. They would eventually marry and form the San Diego-based band, Tell Mama. It wasn’t long before they decided to strike out on their own and immediately began touring Europe for several years, recording the debut CD’s rhythm tracks in Copenhagen between performances. The CD, Missy Andersen, was received extremely well despite having just two original songs.

Knowing that they wanted to write more original songs on the sophomore CD, Missy and Heine took what turned into a much longer than anticipated hiatus from touring to concentrate on songwriting while maintaining a heavy, local performance schedule. Their persistence paid off though and In the Moment was born. Receiving rave reviews from both critics and fans since its August 2014 release, the CD has maintained a steady appearance on four of the Roots Music Report album charts (Blues, Contemporary Blues, California, US Blues) as well as two song charts (Contemporary Blues, California) for radio play. The CD ended the year by being named one of Living Blues Radio Charts Top 50 Albums of 2014.

In October 2014, the duo won the chance to represent San Diego in the International Blues Competition in Memphis along with other blues acts from all over the world. Two months later, they were ineligible to compete because Missy received a 2015 Blues Music Award nomination in the Soul Blues Artist Female category. IBC registrants cannot appear on a final ballot of the BMAs as it is considered to be the top honor in the blues. It was the first time a contestant was disqualified since the rule was instated. Says Missy, “A BMA nomination is a good problem to have.” Indeed.

– “One of the truly great voices of our time.”

– “Missy Andersen proves without a doubt that she’s the real deal.”

– “…Vocal magic that lights up the night.” 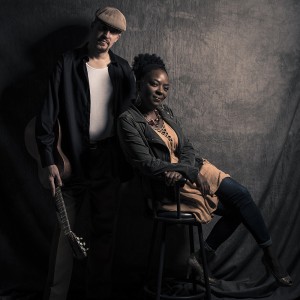