Hailed as “rich” and “captivating” by the renowned music blog, “I Care If You Listen,” the Altius Quartet is garnering an international reputation and enrapturing the hearts of audiences through their charisma and dynamism. MAS Eclectic is excited to present them May 27 at Dazzle at Baur’s.

Altius Quartet is an ensemble determined to further the art of chamber music through performance, education, and outreach. Deriving their name from the Olympic motto: Citius, Altius, Fortius (Latin for Faster, Higher, Stronger); Altius strives to communicate art to a more diverse audience through community engagement and innovative repertoire. Hailed as “rich” and “captivating” by the renowned music blog, “I Care If You Listen,” the Altius Quartet is garnering an international reputation and enrapturing the hearts of audiences through their charisma and dynamism. Having just released their debut album, “Dress Code,” Altius is receiving critical praise for their musicianship and versatility.

Formed in 2011 at Southern Methodist University Meadows School of the Arts, Altius has just completed their tenure as Fellowship String Quartet-in-Residence at the University of Colorado-Boulder, where they were mentored by the renowned Takács Quartet. The quartet has an active performance schedule including engagements at music festivals, series, and universities throughout the United States including: Carnegie Hall, Chamber Music Cincinnati, the Aspen Music Festival, Great Lakes Chamber Music Festival, and the Fayetteville Chamber Music Festival. During their tenure at Southern Methodist University, Altius Quartet served as Ensemble-in-Residence working closely with Matt Albert, Emanuel Borok, and Andres Diaz. In addition, Altius has worked with and been guided by many of the foremost artists in chamber music including the Emerson String Quartet, Miró Quartet, Shanghai Quartet, and Kronos Quartet. In addition, Altius has collaborated with many celebrated artists including Håkan Rosengren, Anton Nel, Andres Diaz, Peter Nágy, and Geraldine Walther.

Altius Quartet is deeply committed to outreach, often performing concerts and teaching master classes in public schools and alternative performing venues including: jazz clubs, bars, and cafes. In 2014, the quartet partnered with the Aspen Music Festival and School for annual educational outreach residencies throughout the Roaring Fork. And beginning in 2016, Altius has worked alongside Denver Friends of Chamber Music and Arts Longmont performing outreach events for school children spanning the entire Denver/Boulder metroplex.

When not recording or performing, Altius Quartet enjoys experiencing the great outdoors and friendly rivalry in their Fantasy Football league. 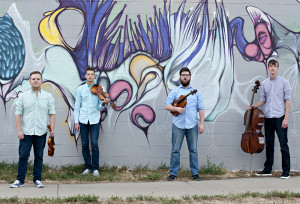