Music Appreciation Society is pleased to present the ingenious music of A.J. Croce. This performance is certain to delight listeners and fans of great songwriting. Hailing from Nashville, Croce is a Denver favorite who always delivers fabulous piano playing and unmistakably original music. If you have never seen A.J. before – this is your chance to become enlightened and hear him do his stuff on Baur’s Steinway grand piano. 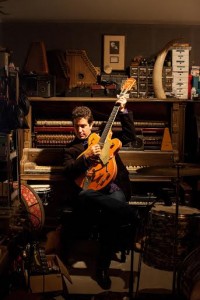 American Singer-Songwriter A.J. Croce born Sept 28, 1971 in Bryn Mawr, Pennsylvania is the son of singer-Songwriter Jim Croce. After the passing of his father, Croce and his family moved to San Diego. At the age of 4 Croce had lost his eyesight, and between the ages of four and ten, Croce gradually regained vision in his left eye. During this time of adversity for Croce, he began to play the piano. “I learned to play music by listening and playing along to the radio and to records…” Croce says, “At some point I was given the music of Ray Charles and Stevie Wonder as inspiration, which it was, and has been ever since.”

At the age of 12, Croce’s first paying gig was for a Bar Mitzvah party, at 16, Croce was a band leader and sideman playing regularly in San Diego nightclubs. At 18, he opened for B.B. King and at 19; Croce signed his first recording contract with Private Music.

Croce’s music has been featured on shows including Jay Leno, David Letterman, Conan O’Brien, Austin City Limits, Good Morning America, E!, and CNN, and he has shared the stage with an innumerable list of eclectic artists from Willie Nelson to Ray Charles, Bela Fleck to James Brown, Lyle Lovett to Morphine, and Rod Stewart to Ben Harper. Croce has been in various radio charts for top 40, AAA, Americana, Jazz, and College music. 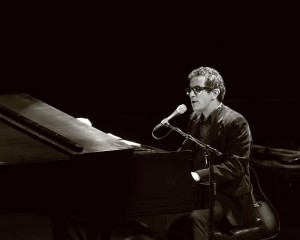 His following albums were released on various independent labels and his own label, Seedling Records, established in 2003 to release his own records and that of other artists. After many years of recording, 2004 brought album Adrian James Croce to win Best Pop album at the San Diego Music Awards. His critically aclaimed 2008 album Cantos is a “pick” selection by All Music Guide.

Croce’s 2014 album was fully released on CD and LP after recording two songs with six legendary producers in five U.S. cities over the course of a year, while simultaneously releasing one song per month.” Twelve Tales turned out to be the most unique and challenging album I’ve made to date. Each producer brought a new unique dimension, and traveling around the US to record with all these talented players was a real treat. This project is like a musical jigsaw puzzle without a box. I didn’t see the full picture until the last song was completed.” ~A.J.

Join Music Appreciation Society in welcoming this courageous artist and talented player is will perform selections from his 8th studio album – Twelve Tales – released on Compass Records – as well as from his incredible repertoire – in the intimate setting of Baur’s Listening Lounge on Thursday, September 10th at 8pm.

“A.J. Croce has wisdom beyond his years. With his music, he represents his generation with a profound sense of honesty in his lyrics and quality in his delivery. The future of entertainment is safe in his hands!”

“A song crafter of the first order”